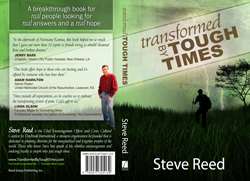 Are you going through some tough times? Are you open to God using your tough circumstances for His purposes? If so, you will want to pick up a copy of Steve Reed’s new book, Transformed by Tough Times. This book helps you use your pain and difficulties to grow and be transformed as you follow the example of Jesus and some of His most dedicated followers. Along with the book, is a 24-session small group Bible study guide that Steve also wrote that can be downloaded from this site for free. Below is Steve’s special message to potential readers of the book, and below that is a sample of the first chapter…

A Message from Steve…

When I wrote the first edition of this book, I felt that my primary audience was Christian leaders. At the time, I was in the middle of pastoring a church, and I loved going to leadership conferences. So the original title of this book was The Suffering Clause: a Leader’s Surprising Secret for Outlasting Tough Times. But a funny thing happened after we printed and began to distribute the book. Readers who weren’t involved in formal ministry got copies and began to give me feedback. Actually, “feedback” is too nice of a word. They scolded me! Some told me in person, and some emailed me to say that my book applied to a much wider audience than my title let on.

So to my friends who chastised me, your wish is now granted! Transformed by Tough Times is my humble attempt to offer a work that can help just about anyone who is faced with some tough circumstances. I’ve added a couple of completely new chapters to the previous edition and have sprinkled in new material throughout. If you read this version and feel that I could improve it for future editions, keep those cards and letters coming! I welcome feedback.

In addition to widening the audience, I’ve also attempted to make this material more user friendly for small groups to experience together. Take advantage of our free downloads of the Transformed by Tough Times small group material.

Also, in the book, you’ll notice a pact for you to sign with a partner. I’ve seen firsthand how those who go through a book like this one with a friend will greatly enhance their absorption of the material and will increase their likelihood of experiencing positive and lasting changes. If you know someone who might be interested in going through this with you, invite them to sign with you on your pact. If they have their own book, offer to reciprocate signing with them.

As you begin to read, I hope you see how you really can be transformed, not just in spite of your tough times, but actually because of your tough times. Could it be that right now, in the middle of your darkest night, God is holding out a candle of hope for you?

Get ready to be transformed.

Take a look at Chapter One and see if this book might help you to be Transformed by your Tough Times.

Transformed by Tough Times: Chapter One

Think About What You're Thinking About…

Suffering. Unlike Visa, it's everywhere you don't want to be.

The game is on the line. We are behind. Seconds are left on the clock. The coach looks at me and hollers, "Field goal!" I trot onto the field and line up for the kick. If I make it, we win. If I miss, we lose. The next day in the paper my name will be associated with "fame" or "blame."

As I stand in anticipation - quaking in my cleats - I pray, "Lord, help!" From that point, everything seems to move in slow motion. The center hikes the ball to the holder. The ball spirals like a missile to the holder, who in one motion catches it and brings it down to the flat tee - spinning the ball to get the laces facing the goal. On that launch pad, the football stops spinning for a split second before my foot meets it. For a moment, I am one with the ball. I feel it bend around my foot, and with a thump it lifts off the tee and clears the line of scrimmage.

As I look up to follow the trajectory of the football, I know that I've hit it well, but quickly realize that I have pulled it a little to the left. To compensate, I lean hard to the right - hoping that by some invisible force I can coax the ball to correct itself in mid-flight. As the pigskin floats toward the goal, I notice that the ball is headed on a collision course with the left upright. I cringe watching the football spin in a backward motion - locked in on that goal post.

Careening off the left post, it flutters down toward the horizontal post and bounces. Like a dying quail, the ball flops over the goal post and falls to the ground. The kick is good! We win! My heart can start beating again.

That was the happy ending of a western Oklahoma, small town high school football game I played in the late 70's. No doubt, the celebration was sweet, and I got to be a hero. But looking back, I believe that the real hero was someone who didn't wear shoulder pads or don a jersey.

The moment before the kick will be forever etched in my mind. My coach put his arms on my shoulders, locked eyes with mine, and with a grin said, "Steve, you've made this a million times in practice. Stay loose, and just go out there and nail it." Then he spun me around and slapped me on the rear and sent me out on the field. My coach's "go-out-and-nail-it" way of thinking set me up for whatever success I experienced that night on the gridiron, and that same philosophy has served me well in dealing with other more weighty challenges since.

But let's contrast this "nail it" mentality with what I call "don't miss" motivation. Kickers get it all the time from fans and teammates who don't understand the dynamics of success. People often yell something like, "Hey Steve! We really need this kick, so don't miss!" Or, "We're all counting on you, so don't let us down." In football language, this is what you would call "icing the kicker." And believe me, it doesn't help. To threaten or implore a kicker to "not miss" is a bad set-up.

In fact, whatever negative image we are to avoid actually draws us to it. Parents understand this with their kids when they're having fun with reverse psychology. I really enjoyed warping my kids' minds when they were little. "Okay, Zach, whatever you do, do not eat this bite of broccoli. It's for me.

I don't want you to have it. In fact, I'll be really sad if you (CHOMP!)…What?! You just ate my broccoli! You better not do that again!"

Why does reverse psychology often work on kids? The same reason it works on you and me. Whatever we focus on will draw us in. "Nail it" thinkers focus on positive results, not on negative possibilities. Athletes who excel demonstrate this all the time. Michael Jordan had a "nail it" mentality when he played basketball. When he took the last shot to win the game, he knew it was going in, and so did everyone else in the arena. More often than not, he nailed those crucial jumpers. How did he get so good? Well, those who played with him talk of his legendary work ethic - being the first on the floor for practice and the last to leave. They talk about his leadership and how he called for the best out of those around him. They talk about how he played entire games in his head, envisioning how he would respond and how he would overcome any adverse situation. By the time Michael Jordan stepped onto the basketball court, he was physically and mentally prepared like few who have ever played the game.

Tiger Woods is another athlete who demonstrates the "nail it" mentality. Granted, off the golf course, he's had his personal issues and character defects, but on the course he has amazing abilities. When his ball finds a rough lie in the middle of a stand of tall grass or behind some trees, he often comes up with incredible shots to keep him at the top of the leader board. How did he get so good at ad lib shots in tough situations? Tiger explains. "As a kid, I might have been psycho, I guess, but I used to throw golf balls in the trees and try and somehow make par from them. I thought that was fun."1 Tiger focused on achieving positive results from any position on the golf course, and he had a good time practicing under the worst conditions.

As helpful as the "nail it" mentality is for athletes, I believe that it is of even greater value to those who face the challenges of life - which can sometimes loom much larger than a steel goal post or a tree in the middle of our fairway.

And yes, boys and girls, there will be a test! What you believe about suffering will be tested in the crucible of your one and only life. Eventually, no matter who you are, you will face less than ideal circumstances. Eventually, disaster comes and we will come head to head with hardships of some kind or another. No one has to go looking for trouble or difficulties. In time, trouble finds us.

I believe that there is a "nail it" way to look at suffering - to be able to focus on the positive results and not on the negative possibilities. I believe that there is a way to face suffering that can help us do more than just outlast our tough times, but to actually be transformed by our tough times. If you will stick with me, and we keep walking together, I think you'll find help, strength, encouragement, wisdom, and maybe even a little bit of inspiration on the road to true transformation.

In a few chapters, I want to introduce you to one of the ultimate "nail it" thinkers of all time. But before I do that, I need to take you to the place where this "nail it" way of life I'd learned from my coach got severely tested. To tell you about it, let's hop on a Greyhound bus that will eventually stop in Lincoln, Nebraska. When we get there, you better get your helmet on and snap up your chin-strap. You never know what might happen when you aren't looking.

Ready to read some more? Great!